Yesterday was the first Wednesday of term and so we held our traditional ‘meet the supervisors’ meeting.   We have two new supervisors for Queens’ this term.   The first of which is Dr David Modic who will be supervising the Economics, Law and Ethics course for the second year students.

Here’s a bit of text about David’s background:

David Modic holds a PhD in economic psychology from Exeter University. Hmm… what is economic psychology, I hear you ask. Well, have you ever wondered about gift giving and why sometimes people are angry when they are given a specific kind of gift (for example a toothbrush or a bar of soap. If it is a bar of soap and they are in prison that carries with it a whole other set of heavy luggage…). Have you wondered how couples share their finances? Have you ever wondered what happens to a country when they change their currency? And why people are depressed when they are unemployed for some time? This are broadly the things economic psychologists research. Simply put – what happens with people when they are put under some kind of economic pressure.

David is primarily interested in Internet scams and why people fall for them, he currently works at the Computer Lab in the security group. David has been researching social aspects of the Internet (i.e. cybercrime, virtual deviance, intrusions into virtual body etc) for the past fifteen years. There are things he finds bizzare, or simply weird, out there. There is a virtual community where people’s status is connected to the amount of virtual furniture they own, so unsurprisingly, there are some pundits who sell their virtual bodies for (virtual) sex in order to get virtual sofas. And that is not all, because that specific community caters to early teens, they filter out swear words. Not a problem for the proponents of the oldest profession in the world and their customers. They just invent a new language to have text based sex. How insane is that? Virtual language to sell your virtual body to get a virtual chair that inflates your virtual status. Stuff like that. Since this is not a research grant pitch, there is no need to get into the huge amount of money that is being lost to cybercrime and so on, but bear in mind that there are real people out there, who date imaginary women who in turn take them for everything they’ve got, including their pride, hopes and dreams. And surely that is worth stopping?

Lately, David’s focus has been the psychology of fraud. Why people fall for it, what makes a good scam, what to be vary of when buying that shiny new iPhone from eBay. It is too simplistic to simply say that people are morons and serves them right to fall for scams. If that was, strictly speaking, true, then only morons would fall for scams. But intelligent people get conned. University professors get conned, and this nation’s leading scientists get conned. And so on and so forth. So it is not exactly true that intelligence is the primary thing here. It is more likely that from time to time, perfectly reasonable people act like fools. And something has to cause this irrational behaviour. Well, David is looking into these mechanisms. More on: http://david.rodbina.org and http://r.deception.org.uk

Last weekend I hosted the final of the British Olympiad in Informatics in the Computer Lab here at Cambridge.   14 UK sixth formers from around the country had got this far out of a thousand or so entrants from schools.  The contest lasted for 4 hours on Saturday afternoon.  Contestants had to program in C++.  A copy of the questions will go up on the main olympiad site http://olympiad.org.uk/ in due course.  The four strongest contestants are now going forward to represent the UK at the international competition in Thailand – congratulations to them!  Here’s a photo of the winners with the organisers and Andrew Fitzgibbon from Microsoft who were the sponsors of the event.   One of Andrew’s papers was used in a core part of my PhD so I enjoyed talking to him!

I gave a talk beforehand about Computer Science (I’ll write a post about this another week).  Here’s a picture of the contestants with their free Raspberry Pi’s donated by the Raspberry Pi foundation. 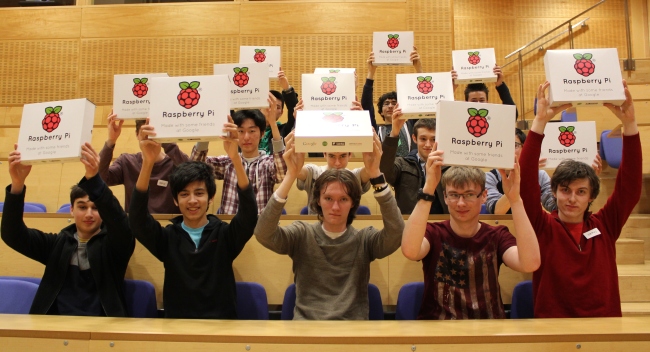 The Jacobus Challenge is a business plan entrepreneur competition for students, held every year in Bremen, Germany. Hosted by Jacobs University, it is open to teams of 2-4 students, giving the top three the chance to win a prize of up to €3000.

The challenge fit perfectly with a project I’ve been working on with Jake and Jeppe, two other second year computer science students here at Queens’. Our project is called Localgag, a website which allows sharing of photos and stories with other people nearby. Visiting the site or opening our app shows you all of the content that has been posted by others nearby to your location.  We came third overall and won a prize of €1000.

Having submitted our business plan, we were soon informed that we had reached the last 10, and were invited to the final event which meant spending an all-expenses-paid weekend at Jacobs University.  After a short one-hour flight, we were met at the airport by a member of the organising team and driven to the campus, situated on an ex-military base.

The next morning, we explored and took the opportunity to post pictures on Localgag, to help demonstrate our project by having some local content for Bremen. The afternoon started with each of the ten teams showing their one minute “elevator pitch” video to the panel of four judges and rest of the audience. This was intended to be a short promotional video demonstrating the potential of the product. Jake did a great job making our video, with people telling us afterwards how impressed they were by it.

Following the elevator pitch, each team had two minutes to present their idea verbally. Jeppe succinctly described the motivation behind our idea and why we believe there is a market for it.

Once each team had finished presenting, we made our way into the foyer where a large A0 poster submitted by each team was waiting for us. Jake, Jeppe and I discussed our project with the judges, members of the university as well as the press. Along with answering questions about our idea, we also had the opportunity to take a closer look at the work of the other teams.

The audience watches as the teams present their ideas

Dinner was provided in the foyer, after which was the announcement of the five teams that would progress to the final stage the next day. Having found it difficult to gauge whether the judges liked our idea, we were very pleased to find out we had made it to the final round, along with a joint team from MIT and Columbia and three teams from Jacobs. Their ideas included a handbag that can charge mobile phones using a fuel cell and a pair of glasses with vibrational feedback to help blind people. We hurried back to our room to prepare, as progressing meant that we would need to deliver a 20-minute detailed presentation of our business plan the following afternoon.

Our presentation was divided between us, and I would be delivering the middle portion of slides. We waited nervously, watching two teams before it was our turn and we went up to the front in our matching shirts. Our pitch was followed by a ten minute question session, in which we were asked how we expected to generate revenue from our product, and how it differed from existing services such as using location hashtags on Twitter.

Having discussed the projects between themselves, the judges were ready to make the announcement of the winners shortly before dinner. We were delighted to hear “Team Localgag” announced as finishing in third place, being presented with a novelty-sized cheque for €1000 to spend on advancing our project.

Localgag receive their prize from one of the judges

The weekend concluded with an invitation to attend the annual talent show at Jacobs, which was great fun and featured performances from many of the students.

I thoroughly enjoyed our weekend in Bremen, and can’t thank the organising team enough for putting together such a great competition. Sadly we were far too busy to have any time to look around the city of Bremen, but I would really recommend entering next year to anyone who has a great business idea of their own.